Increasingly, global brands understand that music is a critical part of the customer experience. As PlayNetwork pointed out in “Brands, Consumers, and The Sound Between,” successful leveraging of music is its own form of currency that buys more credibility with consumers. In order for brands to cash in, they need to integrate music in ways that feel culturally relevant while still being branded. For companies trying to nail a complementary “brand sound” delivering relevant music that feels authentic is critical.

“Customers can tell whether or not your brand actually loves music or if you’re trying to force it. Music can elevate a brand in ways that copy and images just can’t, but it’s got to be real.”[i]

With summer in full tilt, the beer category is among the best positioned to leverage brand sound as part of their marketing strategy. Sunshine, outdoor activities and sipping a nice cold beer are perfectly complemented by the right playlist. Looking at fans of some of the top beer categories on Facebook using the Lightspeed GMI social intelligence product, Context, music seems to be of significant interest to beer brand fans. In fact, music is the most popular category of Facebook pages of “Light Beer Fans.” (Note: for this analysis, this is defined as fans of Bud Light, Coors Light and Miller Light.)

So which music artists might be a good choice for a light beer brand to leverage as part of their next social campaign on Snapchat, Vine or Instagram? Or better yet, which artists should play the next branded summer event and broadcast via social? To answer this, I’m choosing to narrow down to 25-34 year olds specifically (sample size of 17,563) because they represent 41% of our Light Beer fans.

Context’s ability to identify relative top ‘Liked’ music pages compared to all Facebook users gives us a very specific idea of who might best appeal to the 25 to34-year-old light beer brand fans. Looking at top liked pages for Light Beer fans (relative to other 25 to 34-year-olds on Facebook); we have an interesting segment that emerges. Using Context’s “Relative Ratio” feature, we were able to look at Light Beer fans’ percentage of ‘Likes’ for music acts against the general population.

If looking to measure this in a different way, we can look at Top 20 likes as defined by “Absolute Difference” – calculating the pages where there is the highest differential between your audience (Light Beer Fans) number of likes and the general population’s number of likes. Those top 20 pages in rank order of the largest absolute differences are highlighted below and illustrate a continued fanship of both hip hop and country rock. 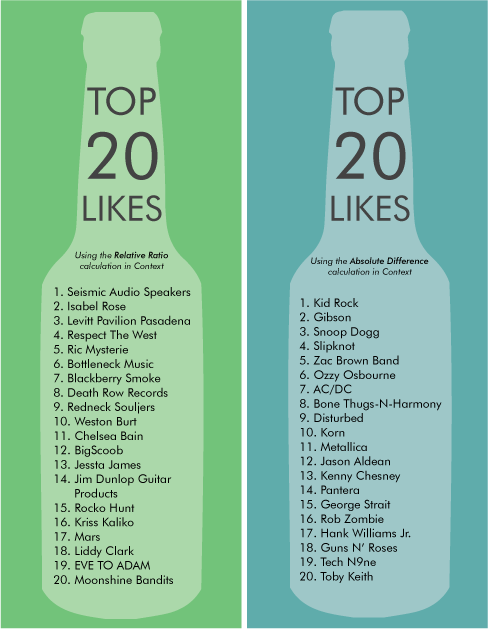 So whether Bud, Coors or Miller choose to have customers sipping along to Zac Brown Band’s “Knee Deep” at a branded beach party or have @RespectTheWest curate a Hip Hop Hollywood Bowl summer night’s concert, the most important thing to keep in mind is to be culturally relevant to your brand fans.

[i] PlayNetwork, Brands, Consumers and the Sound Between: Nine Keys to Marketing Through—and With—Music in 2014.