Your Favorite Candidate Says a Lot about You: Using a Social Intelligence Tool to Measure Social Dominance 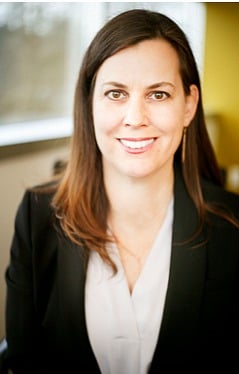 Following Wednesday night’s Republican Presidential candidate debate, and a shift in attention away from Donald Trump to Carly Fiorina in the post-debate news coverage, we were left wondering what it says to support (very!) different political candidates.

When it comes to social psychology and voter personality traits, there is a definite pattern to the trends of Republican vs. Democratic supporters. With non-politician Trump leading the polls, we’re all curious about what’s going on here. We looked at this by surveying a group of roughly 450 fans of the 2016 political candidates and measuring their “Social Dominance” rating.

What is Social Dominance?

Social Dominance Theory is the idea that “all human societies tend to be structured as systems of group-based hierarchies.” A part of this theory is Social Dominance Orientation (SDO) a personality trait measuring the support that an individual gives to the dominance of certain groups over other groups based on factors such as race, sex, nationality, religion, etc. A sample of the statements that someone would agree with or strongly agree with include:

To test this theory we pulled the SDO scores for random fans of candidates across both parties.*

A part of our ongoing Election in Context tracker, we took a look at the Republican candidates and their Facebook ‘Likes.’ As different as they are when it comes to social psychology, they’re less radical in the types of things they chose to engage with online. When we compared fans of the 2016 Republican candidates vs. Democratic candidates, out of 33 categories there were only eight categories where these two groups had statistically significant differences in terms of Share of Mind (what types of pages have they ‘Liked’ on Facebook compared to the gen pop). Republicans over-indexed on Cars/Automobiles, Products/Services, Companies, Apps/Software/Websites and Food/Beverage. Democrats over-indexed on Author/Books, Music, and Actor/Entertainers. Every other category, including Government/Politicians and Business/Commerce were represented with similar importance to these two groups.

When we drill into the categories where there are statistically significant differences between the party fans, we find just as much overlap in taste as we do difference. Take Food/Beverage for example.

When we looked at the early but emerging Republican frontrunners, Donald Trump and Ben Carson (83% of whose fans scored Medium or High on the SDO measure) their top liked Food/Beverage pages are (in rank order): 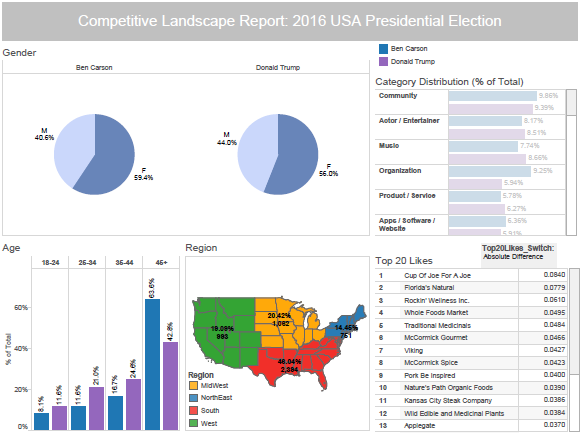 For Sanders/Clinton fans, their top five liked pages in the same category include: 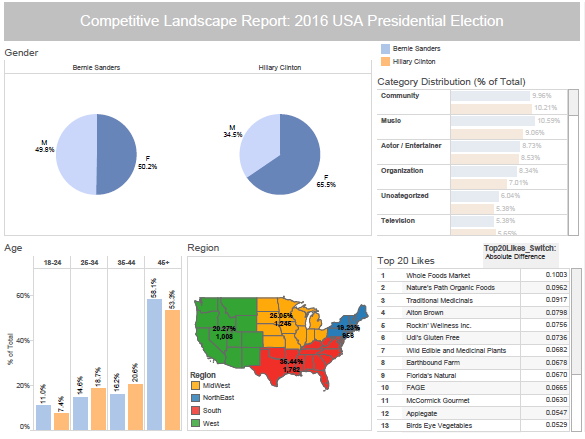 As the long campaign continues, true frontrunners will emerge and the social psychology of their fans, coupled with the brands their fans ‘Like’ in the social media space, should provide an interesting portrait of Presidential candidate ‘brand fans.’

*Total N = 444. The 444 panelists’ ‘Likes’ spanned across the Facebook pages of 17 candidates in both the Republican and Democratic party.