My Name is Jon Puleston and I Am Addicted to Information

From the moment I get up in the morning to the last thing at night I am immersed in information gathering.

News was something I used to read once a day. Ever since having a smart phone, my propensity to consume news has slowly increased month by month, and with the ever increasing proliferation of news aggregation apps, it’s becoming something I dip into almost every spare moment during the day. The first thing I do when I wake up in the morning and last thing I do at night before switching off my phone is check the “news.” It has become a total addiction. In addition to news there is social media, which I consume with equal levels of hunger, be it Facebook, Twitter or LinkedIn. When I run out of new information from these sources to consume, I switch to doing things like looking through pictures on Instagram or virtual shopping on eBay.

Where I am foraging news information from, and the way I am processing and using news information is changing too. It is also fascinating to observe the changes in the news information I am consuming. In days gone by I would pick up a newspaper and carefully read it through from cover to cover on my commute to work; I would read 80% of the content. The high brown newspaper I read could liken this to consuming a three course balanced meal; I would get a full and comprehensive picture of what was going on in the world, albeit from probably quite a biased and subjective perspective of the editor of my paper.

Now I am scanning though hundreds of headlines from multiple editorial sources on news aggregator apps, looking scantly at the headline and pictures and making instant judgements about whether or not to read more. My read ratio has probably dropped to below 10%; high brown and low brown news now sits side by side. I am self-selecting news, hunting out very specific things I am interested in and a lot of it. And, to be frank, I often read fairly salacious news stories that I would never have been exposed to in the past.

With my researcher's hat on, self-observing this change, I began to take a wider interest in understanding the character of news being consumed more generally. So, earlier this year I got my team to scrape data on 30,000 Reddit headlines. Looking at how many upvotes each headline received and how many comments they solicited, we started to analyse them to see what news was cutting through. I creamed off the top 5% and tried to take an objective look at the character of these headlines.

The stories that get to the top of the news pile are a real cabinet of curiosities. They are a heady mix of genuine news and unbelievable truths; headlines that at first glance are so unlikely to be true that you are forced, like passing a road accident to stop and investigate (e.g., “I think I found a U-Boat in Somalia”). Many of them are really so curious of a somewhat car crash observing nature (e.g. “A beautician removing black heads”), that during the process of analyzing them I would find myself being sucked into reading them. Among these articles, you could observe a fair number of health and well being stories, epiphanies and home truths, general tips for getting on in life (e.g., "The 10 secrets of a Successful Person"), and a large number of stories of a political social campaigning nature and people protesting against things that they think are wrong. Mostly, they are dominated by opportunities to be entertained and distracted: the remaining volumes, approximately half of these headlines, were made up of a diverse range of headlines that essentially say "read this and you will be entertained" or "read this, it’s funny," celebrity dominated stories, and perhaps not surprisingly a huge number of pet related content.

The way you could describe a lot of this content is news porn…stories that deliver the reader an opportunity to feel some emotions – it hardly matters what that emotion is – perhaps like our food groups we need to exercise a good range of positive and negative feelings. We are using news as a means of getting a quick dopamine hit, it’s an addiction that mimics smoking. But it’s more than just getting a quick hit. I find myself getting so much more emotionally involved in the news these days; perhaps, in the same way you get hooked into soap operas if you watch them every day.

The major news stories, such as Brexit and the 2016 U.S. election, have me completely hooked. I have mainlined news content from these political stories. And, how I am using and processing this information goes way beyond objective information gathering. What I am looking for so often are arguments and evidence that support my point of view. I am highly practiced in SCHADENFREUDE, delighting in reading about the downfall of political foes, people with opposite opinions having their arguments skilfully met. I find I am far more drawn into politics than I have been in the past. The campaigning and social nature of information content is so much more significant than it once was. I could go as far as to say I feel like I am involved in some sort of news information war, sharing stuff I want others to see and themselves propagate out.

And it’s not just me, the high number social campaign postings cutting through on Reddit seems to support this thought. There is further evidence of this in a poll we conducted of 1,000 consumers in the U.S. to understand how they processed news information during the 2016 election, which could be described as one of the greatest political soap operas of all time.

During the election, more than 80% of the electorate we polled used online news sites in supplement to traditional mainstream news, the majority (55%) on a daily basis. Many expressed their frustration at not being able to access the right type of news they wanted to consume through conventional media outlets, such as TV, radio and published newspapers. Over 75% believed the mainstream media to be biased; over 55% said they used alternative news sources to get their fix, but also to help readdress the balance.

We are picking up and running with this news information. We are socially sharing what we consume and what we think is important. Politics, as a result, is becoming more of a resonant element of our social discourse. Once upon a time I might have discussed a news story I read in the paper over a pint in the pub with one or two friends; now I share a news story with a social network that reaches hundreds of people.

For many, Facebook is becoming one of these primary battle grounds for news sharing and delivery. During the election, the average Facebook user in this poll estimated that they saw between 50 and 100 political news stories shared by their friends. The only way to deal with news information that runs counter to your point of view is to ignore them and we are very good at doing that. The chart below illustrates this beautifully. We asked how many of the news stories they saw were positive about the candidate they also supported, and both sides had a completely myopic viewpoint on the election. 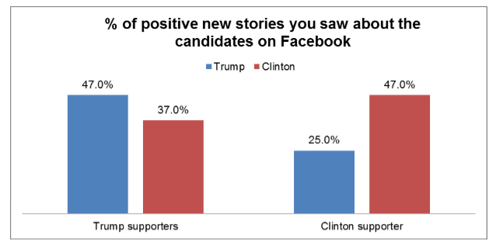 As Adam Curtis, the film maker, has observed in his compelling documentary Hypernormalisation, we are using online as refuge, a place where we go to get our ideas re-assured. The chart below illustrates the tribal nature of this discourse during the Brexit vote. This is a map of news stories distributed on Facebook. 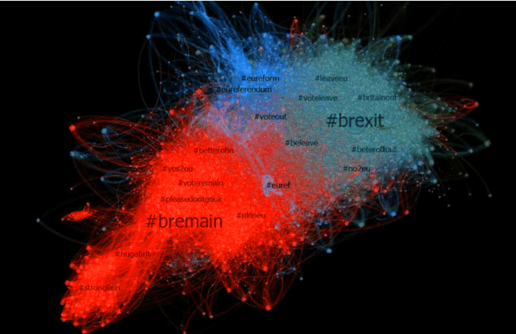 What we are witnessing is social cults emerging, communities isolated not by geography but by opinion. We are all essentially preaching to our own converted communities.

So what have I learned from this process of self-examination and research?

Stepping back from all this and how we choose what we read is partially driven by quite raw survival instincts mixed with our need to be stimulated. What we are being exposed to is being driven though by what the social crowd we are linked with considered socially acceptable. You could observe news stories being treated as a currency for building our social status: if I share this people will like me? The potential implications for society, for brands trying to cut through all this noise online and for researchers, I think are potentially profound.

Dirty news battles: Treating news more like soap opera entertainment, armies of supporters on both sides of the argument are willing to distribute anything that supports their arguments. You can only see the rise of fake news; “the post truth world” politics can only get dirtier I am afraid.

As we are grouping ourselves into more siloed social communities, a new morality framework is emerging:  Where once we were morally led by religious leaders and our family, we are now lead by a new form of social based morality – what is right or wrong is not being reinforced in churches and temples for most people, but by our friends on Facebook.

For brands to cut through all this noise they are going to have to build their own carnival floats to stand out and get noticed: Advertisers will begin to adopt an even louder approach to advertising and promotion that exploits juxtaposition – you have two seconds to make an impact.

Brands will have to develop a stronger social conscious: The power of social campaigning will present a real threat to certain brands.

Researchers are going to have to define new social segmentations: Researchers will need to build new influence models that make sense of a society that is fragmenting not so by age and traditional demographic, but by political and social attitudes.