Brands Can Weather Extreme Content Storm Without Heading for the Exits Brands have sought to distance themselves from being associated with extreme or offensive content, but pulling advertising wholesale may prove to be an equally extreme measure.

WPP CEO Martin Sorrell acknowledged that brands had valid concerns regarding where their advertisements appear, but cautioned that the full boycott employed by some of the world’s leading brands was not in their best interest.

We wanted to gauge consumer attitudes towards the topic and assess the price brands would pay for their ads appearing near extremist and offensive content. To do so, Lightspeed conducted quick-turn opinion research with 1,000 people in 24 hours in the US using mobile phone data collection techniques.

Less than 20% of those between the ages of 18 and 34 said they were upset when they saw brands advertising near extreme content. The assumption made is that younger people have a better understanding of how ad networks work and realize that advertisers have limited control over ad placement. The level of responsibility consumers believe brands have does increase in higher age groups. Closer to 50% of respondents over the age of 55 said they would be upset to see brands advertising around objectionable content. 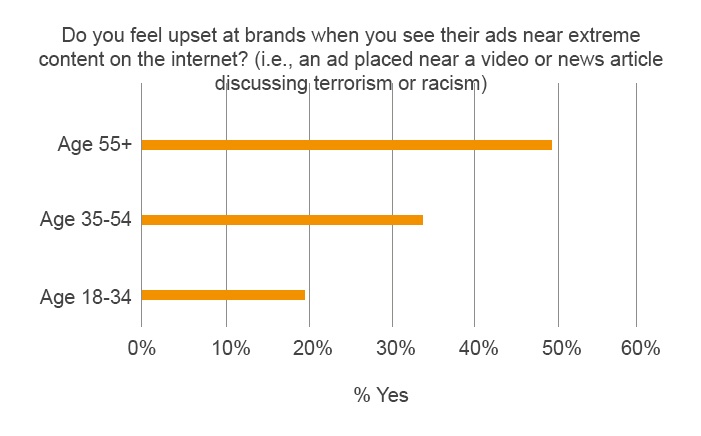 Our research also revealed consumers aren’t likely to hold the brands accountable for extended lengths of time. Some 38% of respondents said there was no long-lasting impact on brands. Just over 45% said that the impact would last a few weeks or months.

“Facebook is equally in the same situation as Google,” Sorrell told CNBC. “I don’t think you can make things 100% brand safe in this area, what you have to do is point out the risks.”

Sorrell added that WPP is working with Google on technology that will help monitor where ads are appearing.

[Google] has stepped up to [the challenge]” of better policing advertising around this type of content he said.