It’s that time of year again when we remember how good the game of tennis is and tune in to watch fast, and sometimes, nerve-wracking play at the Australian Open. Being British, my affiliation with Wimbledon and the tradition of the sport is high. When we ran a study (N=403, Nat Rep) around the ways in which Australians are consuming the 2017 Australian Open, I was still surprised at the seemingly traditional approach viewers have for this competition too. 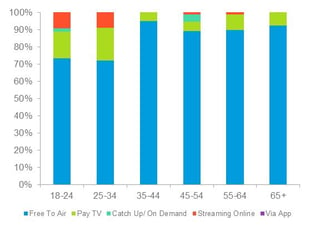 85.9% of respondents told us they are watching via Free-to-Air TV. In a world where we are constantly reminded of mixed channels and a more complicated landscape of media consumption, this seems incredibly high. Granted, the Open, as with many other sporting competitions is ‘owned’ by a TV channel which l no doubt has a bearing on the way in which people follow the coverage. However, Channel 7 offers an app and there are many other means to watch play and the data showed that no viewer was choosing this as their most preferred way to watch the tournament. The second most popular means was via PayTV (i.e., Foxtel and Optus) at 10.2%. 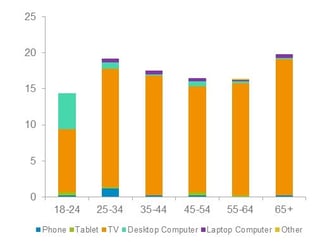 Given the propensity to follow by Free To Air, it was no surprise to see that TV led in the devices viewers are choosing to use, at 90.8% with the largest share by 65+ year olds. What was a slight surprise was the use of desktop computers being most prominent in the 18-24 age group, less so based on the streaming online reported in the prior question but in comparison to tablet or phone which we so often see as a rising method by Gen Y.

In terms of winners, 40.8% selected Djokovic as their men’s singles champion, followed by Murray (30.0%) and Nadal (10.4%). For the women’s, Serena Williams still holds hearts with 66.3% predicting her to win this year, followed by Venus (4.7%) and Radwanska (3.2%). Does this choosing of classic players (notably no mention of Federer in the top 3 and notably with a few now having been knocked out) suggest sticking with tradition rather than up and coming players here too?

It will be interesting to see the reasons for the barriers to consumption via the app ahead of 2018 and the Australian Open and Tennis Australia might take note in seemingly less interest by 18-24 year olds and question if tradition and heritage are prominent now but might cause a future drop in followers of future generations. But for now, let’s watch the semi-finals!